Today was going to be the day we finally got to put parts on the car!

It ended with Caterham arranging to pick up the chassis to rework it.

This morning Dad and I were up early, breakfast and into the garage. We were in good spirits, thinking that visible progress was finally going to be made. We had a beer the night before and a good look at the Assembly Guide, trying to iron out what we thought were some pitfalls and potential problems, especially with fitting the steering rack and front suspension.

Dad masked up the front of the body whilst I looked around for the parts. It took a bit of time, notably finding the correct fixings. It looks as though the numbering system has subtly changed between the manual (February 2015) and the number on the card-backed polythene bag so this threw us off the scent for a while. Also they were in a completely unrelated box to the wishbones and steering. Therefore, we've used one of the empty boxes and put ALL the bags of fixings from EVERY box into one place. Our reasoning was that you can generally tell which part is which (prop shaft, wishbone, steering rack etc), but fixings like nuts and bolts are always similar in appearance. Therefore if they're all in the same place then it SHOULD take less time to find the correct pack. I think at this stage we're still learning 'how' to build the car and how to work with/despite the Assembly Guide (and using some very handy blogs!). I'm sure as our build (eventually) progresses and the fewer parts left to fit we will get quicker and fit parts more easily.

We eventually got everything mocked up on the bench and came to fit the steering rack onto the car (first part, exciting!), bolts didn't fit! The holes in the steering rack platform were clogged with powder coat, so we had to drill them out (to prevent future corrosion we then painted the resulting bare metal in etch primer). This got us thinking, what else needing reaming? We then looked at next stage, the wishbone mounting brackets, and found this: 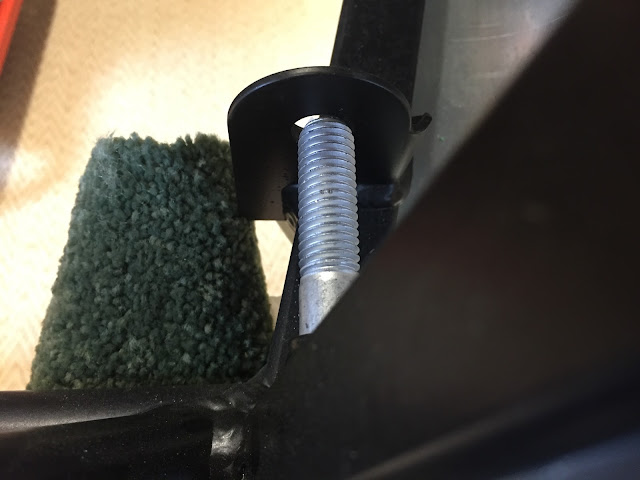 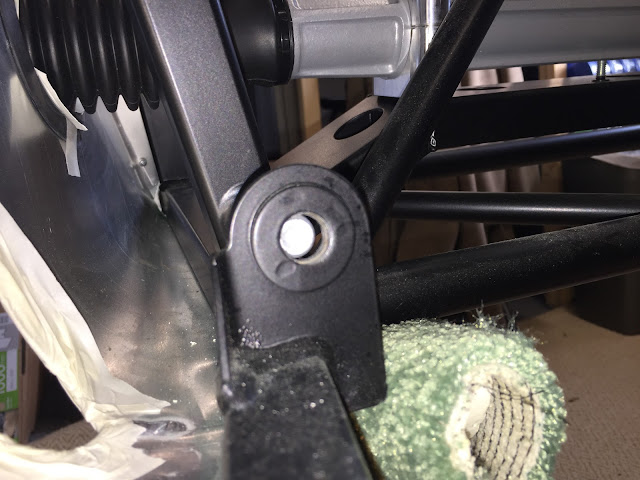 View from the rear of the engine bay, looking forwards. 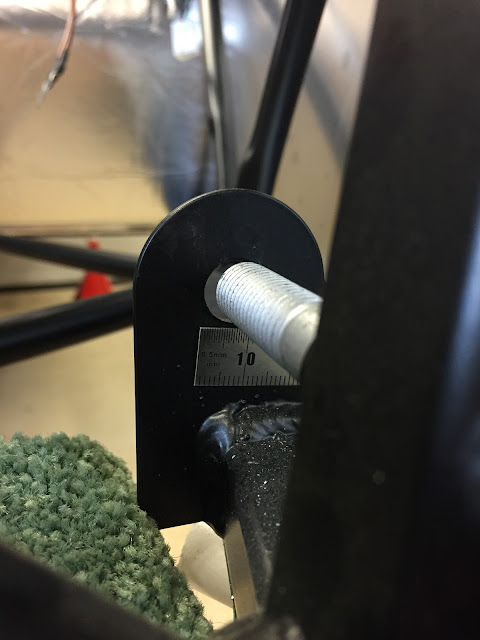 Looking from the front, with a metal rule showing the misalignment.

The eagle-eyed amongst you would say that the bolt is the wrong way around, you are indeed correct, the photo is just to illustrate the problem. What you see above is the LH lower wishbone rear mount, rearmost bracket and it was quite out of alignment. I don't think the photos quite do it justice. The other wishbone mounts were tight and but only needed a small amount of 'persuasion' when we tested fitted the bolts through them, no swarf nor any powder coat in any of the holes. This one however, no matter which way round you had the bolt, it would not (and I mean would not) fit through the square chassis upright section. It would go into the square section a few mm and the 'note' changed to a 'solid' sound when you were percussing the bolt. we retrieved the bolt and you could see the inside of the tube (I guess there's a bush in there?) was starting to get scored and that the threads on the bolt were starting to get mashed by all the bashing.

It was at this point we consulted the Caterham gods (the Caterham TechTalk facebook page) and the man himself Guru Derek Howlett. We weren't really happy with elongating the hole in the bracket, allowing the wishbone to chafe in what would now be a slot, plus also not having one end of the bolt potentially supported particularly on such a critical component.

After a bit of toing-and-froing it was eventually decided that the chassis had to be picked up and reworked. Really disappointing news, we knew there would be trouble ahead, but not this early on into the build. Also what will Caterham do with our car?
I have to say we're more than a little concerned over the above. This afternoon completely took the wind out of our sails and we'll just have to wait until she comes back, and plod on then. When will that happen, who knows...
Posted by Unknown at Monday, November 16, 2015